Descending from the presence of Buddha Vajradhara, the gracious teacher and second Buddha Guru Rinpoche, and so on, HH Jigme Phuntsok Lama Yizhin Norbu has successfully performed countless deeds for the benefit of the dharma and all beings by displaying inconceivable forms. After that, gradually from the prophetic guide of Padmasambhava, the Brilliant Magical Mirror, it is prophesied that an emanation of Nanam Dorje Dudjom, born in the year of the bird will appear.

Accordingly, from the prophetic terma text of Lerab Lingpa, it is said:

Moreover, from the dharma master’s teaching, in Densey Tokjed, it says:

“The prophetic guide of the deity Guru Rinpoche states;
From the Brilliant Magic Mirror:
When the time arrives in the year of the bird,
At a place in Dokham Med,
Atop the lotus flower of mother Lingza Yui Tsomo and, father Denma,
A miraculous emanation of the divine prince of Den will appear”.

In actuality, he is the very embodiment of the wisdom, compassion and power of all the buddhas of the three times, intentionally taking birth in human form as the protector of the doctrine and all the beings in a time when the teachings of the Buddha have become feeble. He re-established the entire teachings of the Buddha from the bottom, causing the precious teachings to arise and shine like the sun in many places around the world and especially in Tibet. Moreover, because Rinpoche gave special attention when it came to the culture, education, and environmental harmony of Tibet – this has been maintained for a long time and still remains. This can be understood as it is in the field of our direct perception.

Even though the qualities of the three secrets of His Holiness are not within the domain of ordinary beings, we believe that it will be greatly meritorious if we can correctly transcribe, translate and introduce the various teachings into many languages, such as the numerous miraculous life stories that appeared to ordinary beings, conventional sciences, instructional spiritual songs, the general and extraordinary fields of knowledge of sutras and mantras along with the teachings of the development, completion and great perfection. The countless refined works of sutras and tantras free from the threefold scrutiny and examinations and the mind treasures arranged in the form of shastras; as proof of the result of learning reflecting and meditating, which burst forth from the expanse of his realization.

The reason is, that although his direct fortunate students have temporarily finished, the accounts of his deeds – the teachings imbued with his blessings will continuously benefit countless tamable beings. Thus, he is a dharma king who lived up to his name, possessing genuine legends with HH Jigme Phuntsok achieving unsurpassable accomplishments throughout the general and particular teachings of the Buddha.

As his kindness is immeasurable like a second Buddha during the resurgence of the Dharma in the remnant age of great degeneration. As it is said, that the merits of remembering a guru even for a second are immeasurable, from time to time, we should practice the remembrance of the guru, the supplication of calling the guru, guru yoga practice and so on.

Another important point is that I believe that he would be very pleased. And we should also serve as a memorial remembrance offering if we can, in the best case, make the offering of equalizing practice in our lives and strive for the sake of the dharma and beings with a sincere commitment and so on.

Therefore, nowadays, with HH. Jigme Phuntsok’s nephew, Chakhung Khenpo Tsewang taking the chief responsibilities and as the Dharma Master of the Yishin Norbu Memorial Committee are performing such meaningful deeds, I would like to thank them from the centre of my heart. 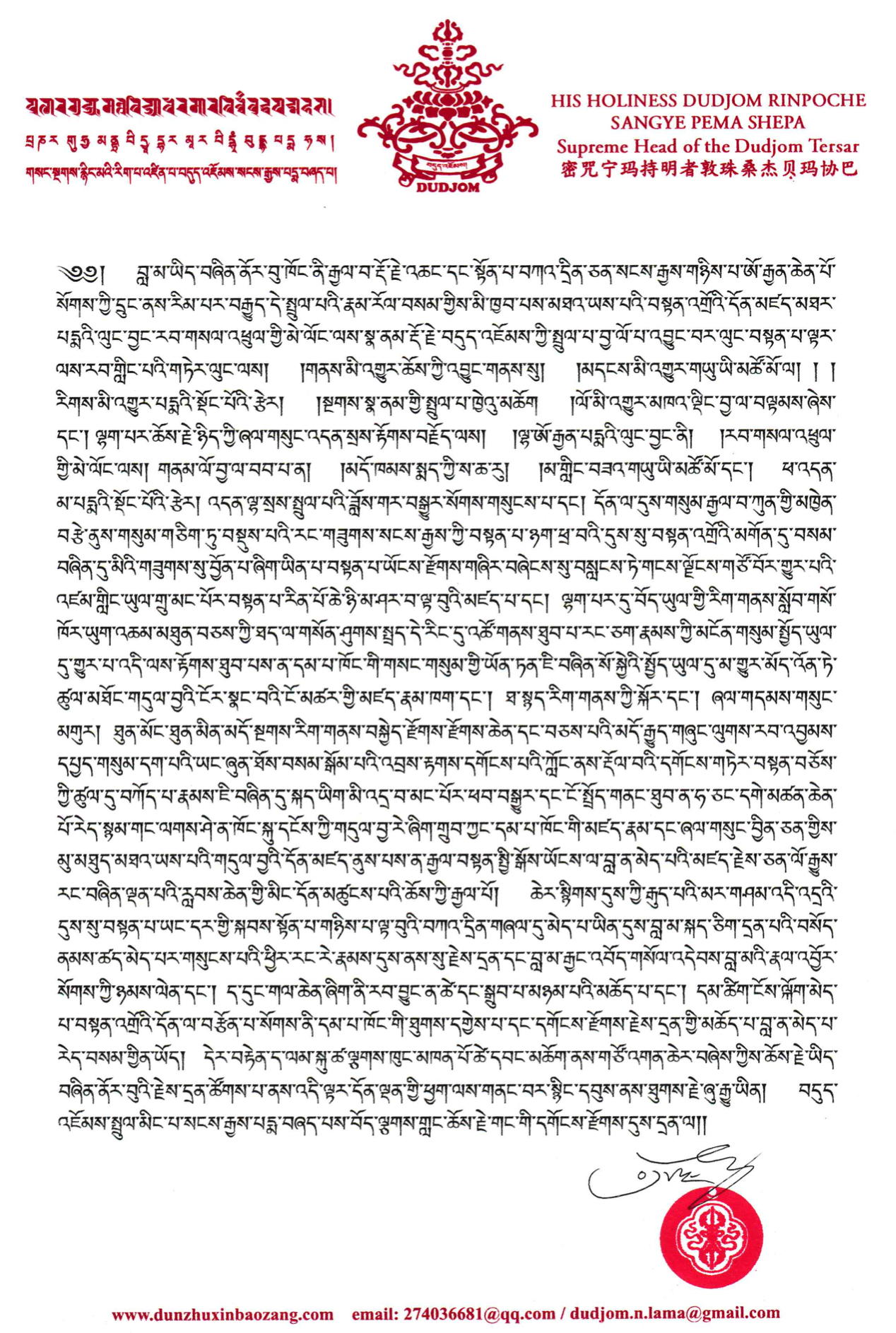 Don’t lose your own path, don’t distrub the minds of others